An eloquent and impassioned advocate for the transformative power of art, Andrew Johnstone works as a trompe l’oeil muralist, serves on the Alameda arts commission, and runs an art mentorship program for at-risk youth.

His aptly named “Big Picture” program teaches young graffiti offenders practical art making skills while simultaneously showing them their place in both the big picture of art history and their own communities.

In addition to redirecting these young artists’ creative impulses into a positive outlet, this brilliant program also addresses the negative environmental impacts of graffiti and the economic costs of paying to cover it up. As a classically trained trompe l’oiel muralist Johnstone is uniquely able to empathize with the impulse to paint in public spaces and to provide a powerful role model of permitted street art.

American Steel: What is the “Big Picture” Arts Project?

Andrew Johnstone: We teach young artists to stretch and prepare their own canvases, while exposing them to other fine art in order to draw challenging comparisons to their own work. We teach techniques and trade secrets they can use to produce more “karmic” art and express themselves in an undiluted and open way. They are also invited to an intimate view of the business of professional artists and seeded with the notion that their natural talent is their ticket to a rewarding life as a future arts professional.

For more about this fantastic program (with the added bonus of Johnstone’s charming Scottish accent!): 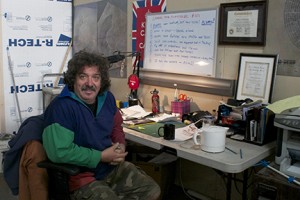 Following a classical European education in the arts, Johnstone became the apprentice and protégé of William Holgate (1931-2002), the worlds finest master of the decorative arts in the last 150 years, working on cathedrals, Royal Palaces and international architectural treasures. His clients recently have included The Smithsonian, Chabot Space and Science Center, Stanford Medical Center and NASA. As a teacher at University of California, Berkeley he lectured in and wrote the curriculum for the course, “Mural and Decorative Arts” and continues his calling to pass along his knowledge with the Architectural Arts Guild.

In 2009 Andrew was nominated for and became one of the Newzonia 500 ambassadors, a group of artists, scientists, and Nobel laureates working on global and sustainable solutions for a world in crisis.

Since 2005 he worked with the legendary architect/artist Rod Garrett on designing of ”The Man,” the centerpiece of the Burning Man festival, the world’s largest art event held every year in Black Rock Desert, Nevada. Andrew continued after Rod’s passing in August 2011 and was given the title of “Design Steward of the Man” by Burning Man.