Benjamin Bowles has turned what was just “something fun to do” in college into an earnest passion that he makes his business: swordmaking for traditional fencing. Contemplative, detail-oriented and wielding an expansive knowledge that he has attained through years of experience and research, Benjamin is the real deal.

BB: My professional title is armorer, armorer or swordmaker. The weapons I make are different than sport fencing weapons. Very different. The traditional construction methods are more important when working with traditional fencing than when doing sport fencing. 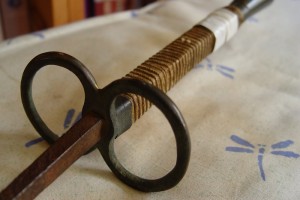 Custom restoration of an antique épée

AS: What sparked your passion for fencing? What about the sport or craft of it really struck you?

BB: The reasons for getting involved in fencing were very clear and simple. I was a hundred pounds heavier than I am now and I went to college in a place I didn’t know with people I didn’t know. I moved away from my home with the intention to change.

I signed up for an individual PE class, which meant going to the gym and logging hours. I ditched that and looked for something else, which turned out to be fencing. The tradition that I happened to find at Humboldt State was more of a martial tradition: it’s a self-defense. The person that walks away the winner is the person who got hit the least, but delivered the most touches. You’re always concerned about your own safety, and that’s something that sport-fencing does not have.

Initially I decided to start fencing to lose weight and find some friends- it kind of went hand-in-hand. Martial arts are about developing yourself. It is a physical activity, and it is very introspective. Like any martial art, you have to learn to control your physical motions, but also your emotions.

It’s hard to say why I continued to do the weapon building. Working with my hands is satisfying. I spent college doing ethereal product. You know, coming up with a creative piece. My particular genre was creative nonfiction – memoirs and reflective pieces. And they’re all kind of ethereal and introspective, but it was never quite as satisfying as building something. So, I just got joy out of weapon building, that’s why I’ve stuck with it for so long.

I realized this was my calling when I was packing to move from Arcata. I was labeling my boxes and had a very happy moment  when I used a sharpie to write on a box ‘business books,’ and saw all that was in the box were books about swords. There were armors texts and journals from the 18th century, scrap notes, schematics, and photocopies from the public library of 18th century costume design and old antique equipment catalogues. I realized, “this is my business.” It is my job to go to the library and do research and to revitalize a weird kind of culture that I think is very important for today’s age.

AS: How did you come to American Steel? What brought you here?

BB: Well, I needed a work space. My previous space in Arcata was in a shipping container and It was incredibly cold and also expensive. When I first moved to the Bay Area, I was looking around and searching on Craigslist. As soon as I found the search term ‘artist studio,’ American Steel came up. I saw the website, looked around, and thought “this is pretty cool.”  The Yelp reviews were brilliant on this place, as opposed to others. I sent an e-mail on the spot. A couple of days later, Sally, American Steel’s manager, e-mailed me back: “Cool! Swords. Come on by next time you’re in town.”

She took me around on a tour and I thought it was quite cool…Solitary artisans making cool stuff. I came here and I visited, and I made a handshake agreement on the day. I said I’ll take it. I was very happy with it. 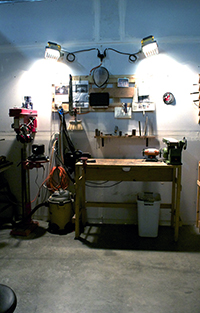 AS: What has AmSteel given you? How has being here influenced you or helped your business?

BB: I’m really looking forward to participating in Art Murmur. I still do my work in a solitary environment in my studio, but the art gallery is something I’ve never had in my business: the ability to put up my weapons on the wall. My business has always operated only on the Internet, I ship around the world. My last batch of weapons went out to Hawaii, New York, Florida, and then I’ve shipped to Indonesia, Austria, Australia. Being here, in a big metropolitan area, and having the ability to put up stuff on the wall, and having a little gala… It’ll be fun! It’s just something I’ve never been exposed to, and I’m happy it exists here.

Benjamin runs his business primarily online through http://benjaminarms.com/. Accredited as an instructor, he intends to begin teaching in the near future. He also plans to have an open house for the November Art Murmur, where he will display his unique weapons on the walls. Come on by to see him in action!