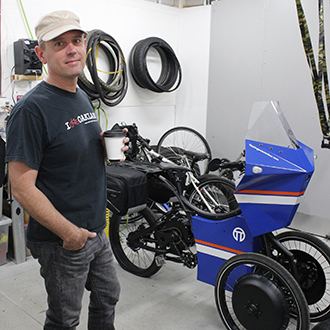 An impassioned advocate for rethinking urban transportation, Joel Fuller has developed an Ultra-Light Electric Vehicle – the Tipping Point Trike – that combines a cargo bike’s utility with the stability of a tricycle.

While working in urban planning, Fuller realized that the majority of individual commuting happens within a two to five mile radius which is inefficient for cars (causing unnecessary traffic and pollution) and challenging for those who are not avid cyclists.

His hybrid vehicle offers an elegant solution that saves fuel, can be operated in a bike lane, and offers enough cargo storage for practical daily commuting. This fills the “practicality gap” between a car and a bike, rethinking patterns of transportation.

Fuller initially started as a photographer, then switched to game design, then to the urban planning field. His background as a 3D artist for game design uniquely enables him to work with urban designers in creating visualizations of potential bike and walk friendly cities that suggest how city infrastructure can be substantively changed. “Tipping point” refers to both the mechanics and concept of the vehicle- physically it “tips” to provide stability while carrying cargo, philosophically it acts as a “tipping point” for changing patterns of urban behavior.

American Steel: What is the idea behind Tipping Point Trikes? 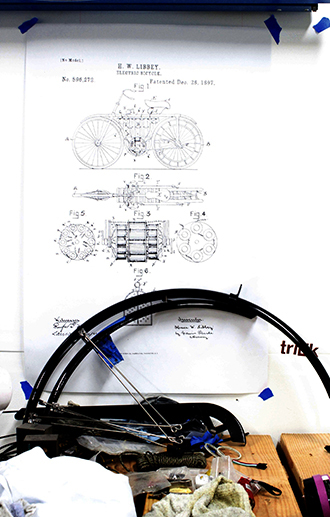 Joel Fuller: Electric bicycles are promising as a means of seeing the bicycle not solely as Americans typically view it—the exercise machine—but as a viable and practical low-cost car replacement. Americans love the independence and freedom that a bicycle lane brings and people are already taking action with cargo bikes as viable urban transportation.

My years working in the urban planning field have shown that envisioning bike- and walk-friendly cities through visualization is key to foreseeing infrastructure changes we can agree upon. I have witnessed that in the auto-dominated transportation planning of the past; there is a rising awareness of a shared vision for bicycle-use that’s promising. Through the dedication of professionals in the planning world, in bicycle advocacy, and in local government it’s been proven we can make the lane-space needed to alleviate the congestion and pollution the automobile brings.

“Tipping Point Trikes is developing just the product to meet the daily needs of commuters and shoppers by providing a practical, safe and clean alternative to the car. At PlaceWorks, we look forward to opportunities to plan for the future for products such as this.”

“Walking, transit, bicycling, and ultra-small electric vehicles will be transportation in cities of the future. The idea that one large device—your car—will work for all your transportation needs is already proving too clumsy. In compact, social, and richly textured urbanism, vehicles need to be small, nimble, quiet, and easily parked. They will be a welcome, not an obstructive, feature of the built landscape.”