Zachary Coffin began his art career as a photojournalist for the Fulton County Daily Report, and after moving to New York City, he graduated from the Cooper Union with a BFA in 1993. His thesis project at Cooper was a huge human powered wing flapping machine, shown at Socrates Sculpture Park, and was the first of many larger than life interactive sculptures. Zach’s piece “The Universe Revolves Around You” is the newest addition to AmSteel’s sculpture park.

A.S.: What do you do?
Z.C.: I engage the public through kinetic, highly-engineered, large-scale sculpture. My works are interactive explorations of physical, mechanical, scientific, and zoomorphic concepts in motion and structure. I use scale, material, mass, mechanics and friction to build art for people in the language of giant machines.

A.S.: Why do you do what you do?
Z.C.: About 20 years ago, I contracted a ruinous disease called GAS — Giant Art Syndrome — which has caused me to pursue this path against all better judgement.

A.S.: What brought you to AmSteel?
Z.C.: American Steel Studios is probably the most important place for the creation of large scale art in the country. It has an amazing industrial infrastructure; bridge cranes and truck bays and the like, combined with a very art friendly administration. I came here to build a large piece for Burning Man and have kept a studio here to finish a commission in Napa and plan to eventually rent as much space as possible. 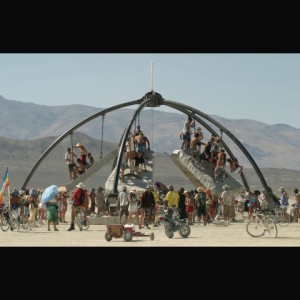 A.S.: What about being at AmSteel is good for your business?
Z.C.: I have a large warehouse studio in Atlanta and I spend half my time in Austin, so my time frame is very long. American Steel Studios allows me to maintain a minimal space as projects are in the planning stage, then expand as needed. And being so close to the center of arguably the most dynamic urban area in the country is a huge plus. Having this capacity in this location is truly unique.

A.S.: What’s your favorite part of being here?
Z.C.: I am a student of Industrial History, why things were built the way they were from the Industrial Revolution forward. The American Steel building was built when America was climbing to the top of world power, back when we would do things like build the Bay Bridge in-house. Since then, sweeping changes in our economy rendered the building obsolete, it was just chance that kept it from becoming a Target or other pointless big box. All those kind of buildings are gone in my hometown, Atlanta. But here is the thing: we are now witnessing another sweeping change in the economy; America is beginning to learn how to make things again. And unlike the information revolution, we need space and tools to make things. It would be cost prohibitive to build a building like American Steel today, but because it was saved and artists are bringing all the systems back online, anything seems possible. In my case the possibilities of scale are tremendous.

Zach’s “Rockspinner” piece in Atlanta has been getting a lot of press recently, and for good reason. The giant 22,000 pound boulder is mounted on a bearing that allows passers-by to slowly turn it around. “The idea behind the Rockspinner” says Zach, “is to make a plaything, an object that allows you to interact with a mass equivalent to 10 tons. One of the most satisfying parts of these sculptures is seeing the amazement of people who come up to a seemingly immovable boulder and find they can move it.”

See what Atlanta INtown, ajc.com, and Midtown Patch had to say about this piece.